Imagine if you will –the most perfect summer day. A warm sun, a gentle breeze and a clear blue sky.

Now try to visualize –the ultimate outdoor theater. Hundreds of people sitting on a grassy hillside overlooking a natural stage set in Viking times. Behind the stage, magnificent mountains and a sparkling Norwegian fjord.

A perfect setting for the timeless and tragic legend of, Viking Hagbard and Princess Signe.

Hagbard and Signe were from the same village, played together as children and fell deeply in love as teenagers. Hagbard is sent off to war and Signe promises to wait for him. Three years later thinking Hagbard is dead, Signe’s father has arranged for his daughter to marry a Russian prince. Hagbard comes back and Signe who is still very much in love with him, refuses to marry the prince. Her father is enraged and insists she honor her commitment, for the good of the village and to protect his reputation as a leader, and man of his word.

He bans Hagbard from the village and locks Signe up. Hagbard disguises himself as a woman and sneaks into the cabin where Signe is being held. The reunited lovers make plans to escape and runaway together, but are caught in the process. A fight breaks out and many people are killed.

Hagbard is captured, tried and sentenced to hanging. A distraught and desperate Signe begs for his life, but to no avail. On the day of Hagbard’s hanging a brokenhearted Signe sets her cabin on fire and also dies.

Singne’s father is grief stricken over the death of his daughter. Her mother, who had also begged for the lovers freedom leaves him.

He is left broken and alone.

Although sad and tragic, the play was also filled with music, dance and sword fighting. There were horses and a witch. They also carried in what looked like a real lamb (my husband assures me it was not) and slit its throat as a sacrifice to the Viking God, Odin. I found myself totally seduced by the surroundings and captivated by the Norwegian history. This production, bringing both tears and smiles, was absolutely mesmerizing!

the orchestra, and the small cabin where Signe dies in the fire

the witch, and Hagbard dressing as a woman so he can sneak in to see Signe

the village singing and dancing, in happier times 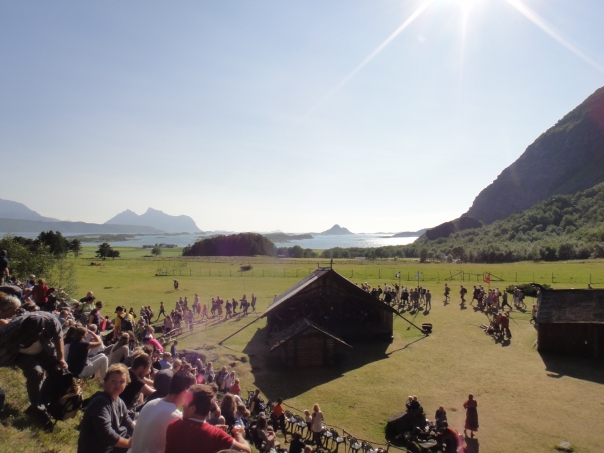 and the view, which was every bit as dramatic as the play

Posted in all things Norsk, Photos