I’m back and fully charged after five glorious days in sunny Italy.

We flew from Stavanger to Oslo, and then on to Pisa. Our final destination was Cinque Terre, located in the westernmost area of the Ligurian Riviera. Before heading out to the sun drenched oasis, we took a detour into Pisa, to see its famous Leaning Tower. The Piazza dei Miracoli (Square of Miracles) consists of four buildings, the Cathedral, Leaning Tower (bell tower), Baptistry, and Campo Santo. They stand close together on a green lawn and were even more beautiful than I imagined but what surprised me most, was how pristine they still look today.

Afterwards we took a train to La Spezia, which is often called the doorway to Cinque Terre. Cinque Terre, in Italian means, “The Five Lands” and is called this because it is composed of five villages: Riomaggiore, Manarola, Corniglia, Vernazza, and Monterosso al Mare. These five villages, the coastline and the surrounding hillsides are all part of a National Nature Park and are a UNESCO World Heritage Site. Here we were able to buy a Cinque Terre Card, which enabled us to take the train and walk on the paths connecting the small villages as much as we liked. From La Spezia to the last village, Monterosso (where we were staying) was only a twenty-five minute train ride.

We stayed at the Hotel Baia which was located directly across the street from the beach. Monterossa is the most touristy of the five villages because of its long span of beach and promenade along the sea. The hotel was an old, four story building with high ceilings (twelve feet) and steep steps leading up to each floor. There was an old glass elevator, but used only for transporting luggage, pregnant women and the elderly. Every room had a balcony, but only the ones in front and on the sides overlooked the sea. Ours was in the back, yet lovely and private just the same. The room was basic, but clean. A buffet breakfast was served every morning in a sunny dining room.

Monterossa is uniquely protected by hills, olive groves and lemon trees. In the backstreets of Monterossa is the old part of town, where there are shops, cafes and of course, churches. Here is where you can also pick up the well-trodden paths connecting the five villages. Trekking from one village to the other can be a little challenging in some places, due to the heat, slopes and steps. 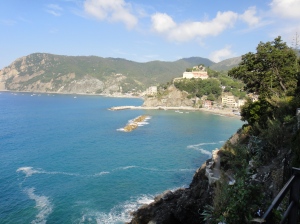 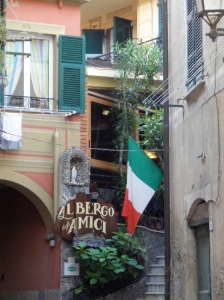 There is more to come on the other four villages, our hike, the local wine, Italian food and the breathtaking beauty of Cinque Terre… But first, I have to read the seventy-nine new posts waiting in my inbox, wash three baskets of dirty clothes and go food-shopping. I won’t even mention what my house looks like after leaving two teenage boys and two dogs home alone to fend for themselves all week. Oh, its great to be home…